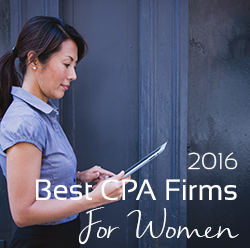 The 10 best CPA Firms for 2016 have been named by the Accounting & Financial Women's Alliance and the American Women's Society of CPAs. The organizations also said the 2016 Accounting Move Project found that women represent 23 percent of the partners and principals at the 49 firms participating in Move, which benchmarks the status of women in the leadership pipeline, compared to 17 percent in 2012.

The Move project this year focused on sponsorship in firms as a way of developing women leaders. The study found that many firms need to put more structure around executive sponsorship programs to product significant better results. The study reported that "Leading MOVE firms track the results of sponsorship relationships, engineer strategic relationships, and coach partners in how to be effective sponsors. When firms adopt these and other progressive policies, they retain and advance more women."

However, it was also found that "Women receive mixed messages about executive sponsorship." Women, the study continued, are told that sponsorship is essential for their careers but that they should wait to be chosen.

In the selection of the Best CPA firms for Women, three characteristics were cited. These are consistent, measurable progress in advancing women to leadership; proven and evolving programs that retain and advance women; and clear and compelling integration of the business case for advancing women.

The firms selected are The Bonadio Group of Pittsford, N.Y. , where 36 percent of partners and principals are women; Burr Pilger Mayer of San Francisco, Calif., which has boosted its proportion of female partners through coaching, professional development, and internal networking; Clark Nuber of Bellevue, Wash, where 38 percent of partners and principals are women; CohnReznick of New York, N.Y. which offers backup child care, women's networking events customized for each office, and top-level coaching for executive sponsors; and Frazier & Deeter of Atlanta, Ga., which has 31 percent women partners and 57 percent female senior managers.

The others five firms as Lurie of Minneapolis, Minn., whose CEO and COO are both women; MCM CPAs and Advisors of Louisville, Ky., where women comprise 60 percent of managers, 57 percent of senior managers and 50 percent of directors; Moss Adams, which has 27 percent women partners and is shooting for 30 percent by 2022; Plante Moran of Southfield, Mich., which resolved "some anomalies" in its first pay equity audit and drew women's initiative leadership into the analysis; and Rehmann of Troy, Mich., which offers a leadership development program and Women's Initiative Network.

Bob Scott has provided information to the tax and accounting community since 1991, first as technology editor of Accounting Today, and from 1997 through 2009 as editor of its sister publication, Accounting Technology. He is known throughout the industry for his depth of knowledge and for his high journalistic standards.  Scott has made frequent appearances as a speaker, moderator and panelist and events serving tax and accounting professionals. He  has a strong background in computer journalism as an editor with two former trade publications, Computer+Software News and MIS Week and spent several years with weekly and daily newspapers in Morris County New Jersey prior to that.  A graduate of Indiana University with a degree in journalism, Bob is a native of Madison, Ind
Last modified on Tuesday, 14 June 2016
Read 2731 times
Rate this item
(0 votes)
Tweet
Tagged under
More in this category: « Study: Workflow a Major Issue Communicating Numbers Effectively to Clients »